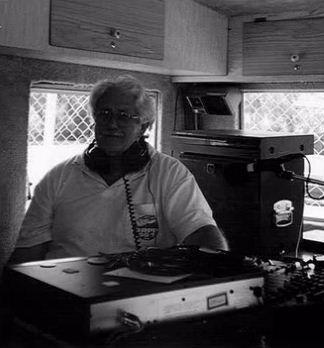 It is with regret that we announce the death of one of the stalwarts of the foundation of RPP-FM.

Fred wore many hats during his time with RPP – the last position he held was that of President, a period of office that he held for several  years.

During his time with us Fred was involved with many aspects of the station from technical to administration.  In the early days in his technical capacity he was heavily committed to making sure that we had a “proper” mast for broadcasting and it was because of his knowledge, together with other volunteers, that the tower was erected at Arthur’s Seat.

Complete with wellies, boots, umbrellas, every conceivable type of weather clothing he could be found scrambling over rocks and mud to ensure that the building of the tower went forth.  He also liaised with the authorities to ensure that the signal was legal and actually worked. Next big project was another tower that could be erected so that the radio signal could be heard in Frankston, which had always been a blackspot for reception.  Again, up and down ladders and scaffolding on rooftops – all in the name of devotion to RPP.

A further love that Fred had was that of outside broadcasting and he was always there with the football broadcasts and other outside events.  In fact, he built one of our first – if not the first OB van – it was a huge construction – but needs must when the devil rides – which proved in the long run to be far too heavy for any towing vehicle to cope.  The body was so demanding that it caused the axle to give up the ghost.  However, it served our purpose for a long time.

For his contribution to RPP Fred was named a Life Member.

Before to coming to RPP Fred had been involved with 3MBS for a considerable time and also was skilled at stage lighting for various big events in Melbourne.

Vale, Fred, and many thanks for all your hard work in making RPP a reality.

One of the world’s great musicians takes time out to talk to RPPFM’s Mission Impossible – astonishing music and amazing melodies. RPPFM is thrilled to announce that on Friday June 21st at 6.00 p.m. there will be a two hour special featuring one of the world’s most amazing musicians – Erin Moran (known as ‘A Girl Called Eddy’) plus the station chats about her latest project with French music guru Mehdi […]