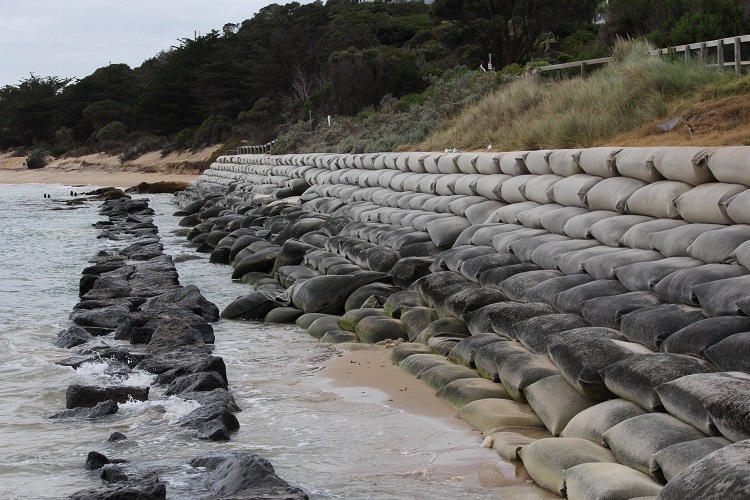 With summer almost done – RPP Reporter Tom McEncroe asks – can the Front Beach ever be restored?

Portsea residents are still fighting against the loss of their prized front beach, but have won a reprieve against a controversial plan to save it.

Work was due to begin on a rock seawall east of the pier to prevent further erosion, but late last year the plan was postponed by the State Government following a protest campaign from opponents who argued it would not save the beach.

The Victorian Government, in addressing the deteriorating state of the beach, had commissioned a 70-metre rockwall to replace the temporary sandbag structure there now. This followed an independent analysis obtained by the Victorian Department of Environment, Land, Water and Planning (DELWP) in 2014, responding to reports of increased swell activity and a noticeably eroding sand bank.

An external engineering consultancy finalised a report in 2016 detailing six long-term coastal solutions, ranging from $2 million to $20 million in cost. A “rock revetment” distinctly represented the most economical and timely option, and in June 2017 was chosen by DELWP.

The decision, however, was immediately met with strong resistance from local lobby groups. The Nepean Ratepayers Association and the Portsea Foreshore Advisory Group, initially responsible for bringing the matter to the government’s attention, vehemently opposed the decision on the grounds that it would do nothing to re-instate the beach.

Public posts from both groups lamented the economic motivation behind the scheme and state that it will only “perpetuate the existing environmental, commercial and social problem”’ for the Portsea community. Together, the groups raised a fighting fund and appointed a publicity company to help develop a media campaign and pressure the government to reverse their decision.

Last year, Mornington Peninsula Shire joined with the local community in attacking the proposal. It posted on its website that it “is strongly advocating to the state government to halt plans to develop a rock revetment at the Portsea Front Beach and to work on a solution which will protect the area from erosion and bring back the beach.”

“The state government’s rock revetment proposal by itself will achieve erosion protection but will not guarantee the return of this iconic beach.”

In September the State Government changed course, with Victoria’s Energy, Environment and Climate Change Minister Lily D’Ambrosio ordering the rock wall project to be postponed, instead authorising the repair of the existing sandbag sea wall, laid down in 2010, at a cost of $950,000.

The precise cause of the rapid loss of sand to the east of the pier is not known. Several independent reports link the increased swell energy to the 2008 dredging of Port Phillip Bay, albeit inconclusively. But whether it was this, or whether rising sea levels might have also contributed, one thing is certain – the beach is gone.

Strategies and responses to saving Portsea’s fragile sand give an insight into how similar problems will be tackled elsewhere on the Mornington Peninsula if sea levels continue to rise. The Victorian Government, on its Victorian Coastal Council website, states that the state’s shoreline is likely to be impacted this century by sea level rise and increased frequency and severity of storm events leading to inundation and erosion.

But the central issue in campaigning by the lobby groups in Portsea is the 2008 Port Phillip channel deepening. The groups argued the government should fix the problem it created, and hence the issue has become mired in politics.