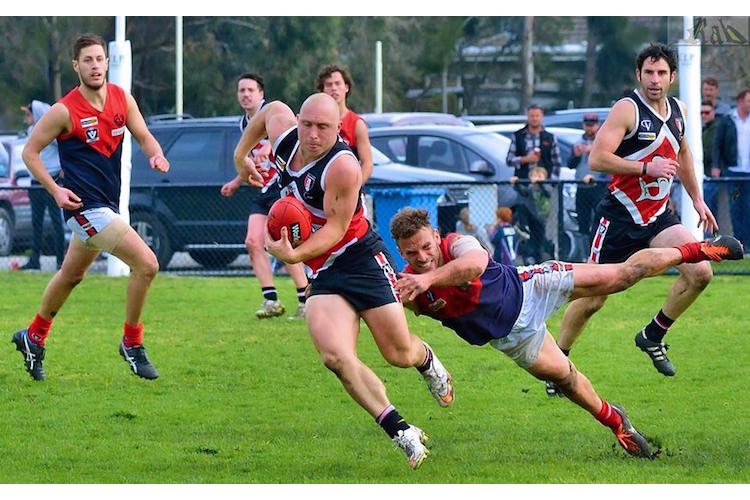 BONBEACH legend Shane McDonald set the ball rolling and dragged his teammates along for the ride as the Sharks celebrated their favourite son’s 200th senior game with a stunning 60-point dissection of Mt Eliza in the Telstra RPP FM Match of the Day at the No.1 Oval on Saturday. 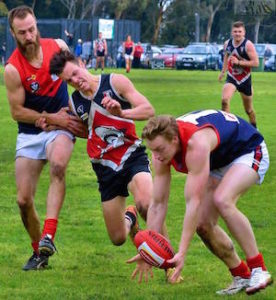 McDonald turned on a stunning first-quarter burst to kick four classy goals – a left foot snap, a long set shot, a close set shot and a running long bomb – to set the Sharks on the way to a big win that dragged them within reach of the double chance with two rounds to go before the finals.

Bonbeach dominated the contest, and it was only the Redlegs’ ability to score on the rare occasions they managed to go forward that kept them within 19 points at the first break on the Rye Hotel Scoreboard.

With their tails in the air, the Sharks went to another level again in the second quarter to all-but put their highly-rated rivals away, adding another four goals to none to blow the half-time margin out to 42 points.

Jackson Casey led the way for Bonbeach with an outstanding performance, winning countless quality possessions, breaking the lines and driving the ball forward regularly in a strong four-quarter performance that won him the Mornington Peninsula Brewery Man of the Match – but he had plenty of mates.

Ruckman Dylan Jones was the dominant big man on the ground, Justin Bennett was terrific and capped his good work with three goals, Luke Damon also kicked three, youngster Beau Bailey, the experienced Daniel Smith and captain Gary Carpenter were in everything and Brad Sykes, Nick and Ash Waterstone gave away nothing in defence.

While McDonald still looked dangerous for the rest of the day, his output was blunted somewhat by a good defensive display from Karl Lombardozzi, who made the move at quarter-time and was Mt Eliza’s best player. 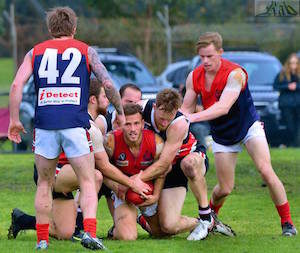 Lombardozzi and fellow defenders Jay Neratzoglou and David Barton could hold their heads high, and were a major reason why Bonbeach didn’t win by significantly more, while Daniel Gormley and Robert Turnbull also did well.

Mt Eliza had its best period in the third quarter, kicking four quick goals to cut the margin to 25 points, including two to the otherwise well held Jordan Capkin to raise some hope.

But the home team steadied with two late majors to break the Redlegs, and six goals to two in the last gave it a significant percentage booster that cut a 15% deficit to Pines back to just 4%. 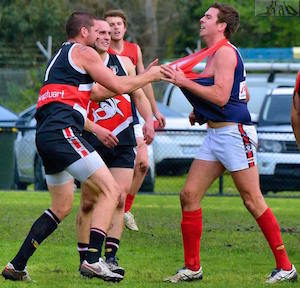 The closing of that percentage was helped by the spluttering Pythons themselves, who slumped to a third consecutive defeat in a 56-point beating from flag favourites Frankston YCW at John Coburn Oval.

Pines had lost to Langwarrin and a resurgent Mornington in the previous two weeks, but showed signs of a return to form by taking it up to the powerful Stonecats for 2½ quarters.

With Aaron Edwards kicking four goals to keep the pressure on Mick Meehan in the race for the league’s leading goalkicker, Pines led by three points at quarter-time and answered a six-goal second-quarter blast from YCW to close within eight points midway through the third term.

Luke Potts returned to form with an assured display, while Brad Kiely, Chris Guganovic and Paul Scanlon were also looking good, and an upset was looking possible.

But the Stonecats flicked the switch, and with Anthony Bruhn booting five goals in a best on ground display, Ryan Santon adding three and Michael Debenham on fire, they kicked the last four goals of the third term and then five to one in the last to run away with a convincing win.

While the race for third spot has been opened up, the race for fifth and an all-important finals berth is also well and truly back on, and Seaford returned to the top five for the first time in several weeks with a 72-point belting of a listless Karingal at RF Miles Reserve.

With a wasteful Edithvale-Aspendale slumping to a 34-point defeat at the hands of the rejuvenated Mornington to open the door, the Tigers took full advantage, conceding just a solitary goal in the first half and only 3.4 for the match as Karingal was unable to get anything going.

Matt Herbert was best on ground as his purple patch continues and Mitch Finn was also impressive as Seaford woke up from an uninspiring first half to blow the match open with 7.5 to 2.3 in the third quarter to bank a comfortable win.

The Eagles looked not only safe in the five but a threat for third just three weeks ago, but had no answer to the youthful exuberance of the Bulldogs at Alexandra Park to find themselves in sixth spot on the ladder and out of the five for the first time this year.

Dale Whelan’s five goals and Ryan O’Dell’s brilliant display helped Mornington blow the game open with six goals to one in the second term that turned a one-point deficit into a 29-point lead, and kicking 4.2 to 2.9 in the second half ensured it would not let Edithvale-Aspendale back into the contest.

Liam Harris and Tim Mannix were best for the Eagles, while Meehan was held to just two goals, with the near six-goal loss coming despite having 23 scoring shots to 22.

Langwarrin ran away from a gallant Chelsea in the final quarter to win by 49 points at Lloyd Park.

The Seagulls haven’t won since defeating the Kangaroos way back in Round 3 – 12 losses in a row as injuries, poor kicking and poor form cost them several winning chances.

But they were right in this contest, highlighted by a seven-goal second quarter that saw them take the lead before half-time and be within four points at the main break on the back of great displays from Grant Trew and Jason Clark.

They were still within 10 points at the final change, but ran out of legs as Langwarrin produced a nine-goal last quarter to run away with the points, headlined by a magnificent seven goals to Kieren Albanese and quality performances from Joel and Josh Bateman.

SOMERVILLE almost certainly wrapped up the Nepean League double chance and consigned Red Hill to a sudden death Elimination Final for the second straight year with a hard-fought 17-point victory at Somerville.

With the prize of a top three berth on offer for the winner, it was always going to be a desperate struggle between two premiership fancies in a tight competition, and neither team could secure the upper hand in the first half.

The Eagles trailed by two points at half-time as the Hillmen stuck with their more fancied opponents on the back of strong efforts from Jonah Siverson, Ben Poole and Tom McKinley, before lifting in the premiership quarter.

Billy Rolfe and Ben Sedgwick stepped up to finish with four and three goals respectively, while Justin Allsop, Scott Simpson and Josh Westerman proved important around the ground as Somerville kicked four goals to one to take a 21-point advantage to the final change.

While Red Hill refused to go away and twice closed within two kicks in the last quarter, the Eagles held firm to seal the victory and, as long as they beat Crib Point in this week’s last round, two bites of the cherry in the finals.

Frankston also ensured it can’t miss the top three by overrunning Pearcedale by 40 points at Pearcedale.

After leading by just nine points at the main break, Zac Longham continued his fine season to kick five goals and James Degenhardt was best on ground as the Bombers eased away from the Panthers in the second half to ensure it will win the minor premiership with a victory over Hastings this week.

Harrison Prior was Pearcedale’s best in his first game of the season and only his second in two years, while Alex Harnett also performed well to push his league medal claims.

The Tigers had been tough to toss on their home deck this year, but were blown out of the water from the opening bounce as the Buds piled on 7.5 to 2.0 in the first term – and it only got worse from there.

Only Rosebud’s poor kicking and Dromana’s accuracy saved an even bigger flogging, with the visitors having 40 scoring shots to 10 but finishing with 17.23 to 9.1.

Hastings bounced back from its loss to Somerville with a 102-point thrashing of Crib Point at Thomas Barclay Reserve, kicking 14 goals to two in the first half, while Devon Meadows easily accounted for Tyabb by 38 points at Glover Reserve despite losing the second half by eight points.

Sorrento and Rye had a week off, having met on Queen’s Birthday weekend, with the Sharks seeing their finals hopes evaporate in their absence.

THE NEPEAN LEAGUE MINOR PREMIERSHIP GOES ON THE LINE IN THE FINAL ROUND TELSTRA STORES MORNINGTON AND ROSEBUD MATCH OF THE ROUND AT GREG BECK OVAL ON SATURDAY WHEN FRANKSTON AIMS TO CAP ITS OUTSTANDING HOME AND AWAY SEASON BY SECURING TOP SPOT AGAINST THE DANGEROUS HASTINGS. THE BOMBERS WON FIVE GAMES LAST YEAR AND ARE LOOKING FOR NO.13, WHILE THE BLUES WILL LOOK TO BUILD MOMENTUM FOR A LIKELY ELIMINATION FINAL NEXT WEEK. JOIN ANDREW ‘TOE PUNT’ KELLY, MICHAEL VOSS AND BRENDAN ‘JONTY’ RHODES FOR ALL THE ACTION FROM 1.45PM ON RPP FM 98.7, LIVE STREAM FROM THE RPPFM.COM.AU WEBSITE OR DOWNLOAD OUR RPPFM APP – YOUR VOICE OF PENINSULA FOOTY.

Go to the RPP FM facebook page for pics and videos of the action by Rab https://www.facebook.com/RPPFM/

This live coverage would not be possible without the continued support of local businesses.

OTHER RESULTS AROUND LOCAL FOOTY