Box seat for Eagles in finals 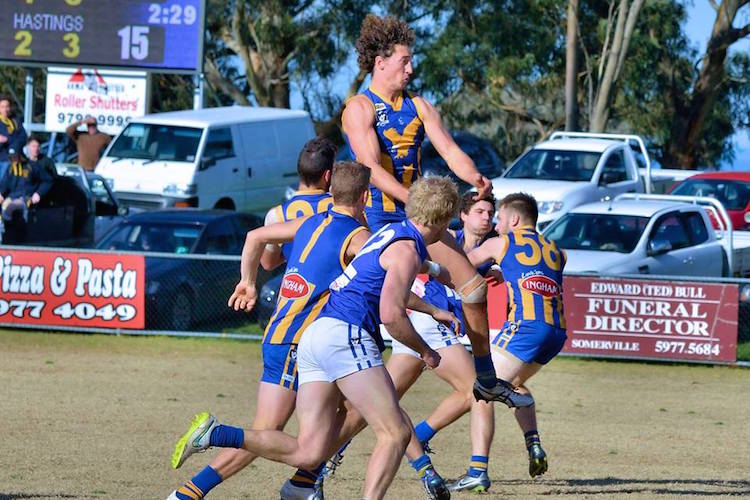 Round 15 by Brendan Rhodes

SOMERVILLE full forward Luke Rowe produced a classic display of how important it is to take your opportunities when he kicked six goals to put the Eagles in the box seat for a Nepean League double chance in an exciting nine-point victory over Hastings in the Telstra Stores RPP FM Match of the Day at Somerville on Saturday. 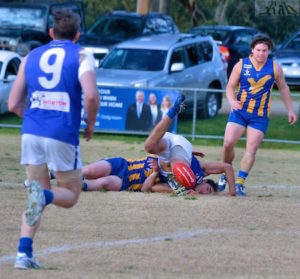 With the winner taking third spot two weeks out from the finals and the loser still with work to do to ensure a finals berth, this was the classic eight-point game, and the big Eagle delivered in no uncertain terms. 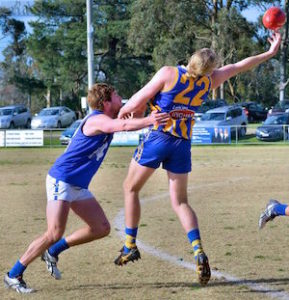 Somerville needed a good start after losing coach David Hirst before the game to a flare up of his foot injury, with Luke Gruar being handed a debut, but the home team would have wanted a bit more than it got – kicking with a four-goal wind, it was unable to shake off the Blues early, needing two late goals to take a 14-point advantage into the first break on the Rye Hotel Scoreboard.

The Eagles’ scoreboard struggles came despite Rowan Hogenbirk dominating across half forward and kicking two of his three goals, Justin Farrelly clearly winning the ruck, Todd Farrelly and Scott Simpson patrolling the backline successfully and Josh McMahon and Adrian Speedy providing good run through the middle.

Hastings, however, was unable to take its own turn with the wind for the most part as the Eagles managed four goals against it to build a handy lead.

But captain Paul Rogasch, Steve Robb and Dale Alanis stepped up in the second part of the quarter, and with Colin McVeigh enjoying a purple patch that yielded three quick majors, the Blues hit back hard to cut the half-time margin to just three points. 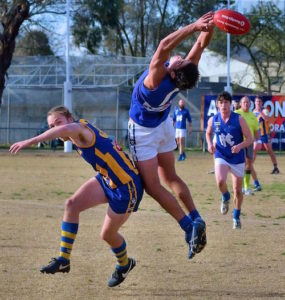 Brothers Luke and Jake Hewitt found top form to drag their team back into the match, while Shaun Foster, Matt Clifford and David Hull also made their presence felt.

Somerville needed to build a big lead in the third quarter give itself a chance at victory – and it needed to shut the dangerous McVeigh down.

Kane McKenzie, who had made a couple of critical mistakes in the second quarter, did just that, with the Hastings star being a non-factor after half-time in a crucial win for the Eagles.

With Rowe booting his fourth and fifth goals, Billy Rolfe buzzing around the forward line and Josh Westerman, Tim McGenniss and Luke Burton lifting, the Eagles pushed out to a 17-point lead turning for home – a margin that extended to 23 early in the last when the impressive Hogenbirk kicked his third.

But it wasn’t over.

Luke Hewitt kicked a goal to pull the margin back, and then Mark Devereaux produced an absolute gem – unloading a long bomb from well behind the centre circle into a vacant 50m zone, with the ball bouncing 40m out and rolling end on end through for one of the goals of the year.

He then added another to pull the margin back to three points and it was well and truly game on.

The game required a hero, and it was Mornington Peninsula Brewery Man of the Match Rowe who delivered, taking a powerful pack mark at the top of the goalsquare with 90 seconds to play and kicking his sixth goal to seal the victory.

With other results going the Blues’ way, Hastings needs only to defeat 11th-placed Crib Point this week to seal its finals berth and lock up the top five, but its hopes of securing a double chance look to be gone.

Many people saw Tyabb’s trip to Crib Point as a golden opportunity for the Yabbies to finally break its 47-match losing streak stretching back to the final round of the 2013 season.

But someone forgot to read the script to the Magpies, who have suffered through a nightmare season of their own, with just one win (against Tyabb) before this clash.

After a desperate first quarter struggle that yielded just five behinds between the two clubs, Crib Point put the foot down in the second term with Kyle Arnott, Kain Stratton and David Cook taking control to kick the first four goals of the game and lead by 27 points at half-time.

It was the third week in a row the Yabbies had failed to kick a goal in the first half, but they did rally with the first two goals of the third quarter as Tyson Sparkes and Ethan Rahilly tried to lift their team, getting within 14 points.

That, however, was where the challenge ended, as the Magpies answered the two majors and then cruised home with four to one in the last for a 46-point victory.

Rosebud continued its brilliant form to all but end Sorrento’s season, winning by 34 points at Olympic Oval.

The Buds led by 11 points at half-time, but Keegan Downie’s four goals and the dominance of Robert Bos, Sean Downie and Jack Jarman overwhelmed the Sharks, and the reigning premier piled on 8.5 to 0.2 in the third quarter to blow the game open.

Nick Marston led Sorrento to kick five goals to one in the last term to soften the damage, but with a bye this week, the Sharks need Crib Point to pull off a major upset if they are to stay alive.

The Bombers always had the upper hand, but led by just 19 points at the final change – a position the Tigers had managed to win from previously this year – but Dale Sutton and Brian O’Carroll ensured that was not going to happen this time, sparking a six-goal-to-one last quarter for a big win that kept them on track for the minor premiership.

Rye’s season is also over after a comprehensive 32-point loss to Red Hill at Red Hill.

The Demons came out fired up to avenge last week’s shocker against Rosebud and raced out to a 27-point lead at quarter-time, but that was where it ended.

The Hillmen cut loose in a devastating second quarter, piling on 9.3 to 0.1 to turn that 27-point deficit into a 29-point lead and break the spirit of the visitors, cruising to victory with four goals to three in the second half.

Alex Doria kicked six goals as Devon Meadows saw off a late challenge from Pearcedale by 13 points in the Panther Derby at Pearcedale.

Devon was in complete control with a 45-point lead turning for home, but the home team roared home with five unanswered goals to create some nervous moments, only to run out of time.

Seaford reignited its flagging Peninsula League finals hopes by hanging on for a gutsy two-point victory over Edithvale-Aspendale in a heartstopping finish at Regents Park.

The Tigers needed to win to have any chance of making the finals, and they took it up to the Eagles from the outset, scooting out to a 17-point lead at quarter time on the back of an excellent display from Matt Herbert, who kept Mick Meehan to just two goals, Jackson Mockett (four goals) and Curtis Murfett.

Edithvale-Aspendale hit back in its turn with the breeze in the second term to take the lead by three points at the main change, with speedy little man Will Flavelle, Joel O’Sullivan and Liam Harris all important.

With its season on the line, Seaford responded, kicking five goals in the third quarter to build a 21-point lead at the last change and then clung on for dear life as the Eagles threw everything at it in the final quarter.

Edithvale-Aspendale kicked 6.1 to 3.0, but Seaford wouldn’t be denied and were on the right side of the ledger when time ran out.

Mornington’s late season rally gave it another example of what might have been when it overturned Pines by 17 points at Eric Bell Reserve.

The Bulldogs’ hopes of avenging last year’s Grand Final loss fell by the wayside in a horror first half of the year, but their young players have shown plenty of good signs for the future, especially in the past fortnight with a last kick loss to Frankston YCW and now a gutsy win over the third-placed Pythons.

And it was Ryan O’Dell and experienced ruckman Michael Gay who led the way, with Mornington kicking five goals to none in the second quarter to gain a handy lead, before seeing off a third-quarter rally to send Pines spiralling to a second loss in succession to a team in the bottom three on the ladder.

Jordan Capkin cut loose to boot eight majors as Mt Eliza kicked 13 goals to one after quarter-time to bring Langwarrin crashing back to Earth in a 78-point caning at Emil Madsen Reserve to celebrate Mitch Wilson’s 100th game for the Redlegs.

Seven third-quarter goals proved the difference as Frankston YCW overpowered Karingal at 63 points at Ballam Park and Bonbeach had 11 goalkickers in a 90-point pasting of wooden spooners Chelsea at Chelsea.

CONSECUTIVE DEFEATS FOR PINES HAS OPENED THE DOOR TO THE PENINSULA LEAGUE TOP THREE FOR BONBEACH, AND THIS WEEK’S TELSTRA STORES MORNINGTON AND ROSEBUD RPP FM 98.7 MATCH OF THE ROUND WILL SHOW WHETHER THE SHARKS ARE GOOD ENOUGH TO GO THROUGH IT WHEN THEY TAKE ON THE SECOND-PLACED MT ELIZA AT THE NO.1 OVAL. JOIN ANDREW KELLY, MICHAEL VOSS AND BRENDAN RHODES FROM 1.45PM SATURDAY ON 98.7FM, THE RPP FM APP OR LIVE STREAM FROM www.rppfm.com.au FOR ALL THE ACTION.

Rab captures the action on video – go to the RPP FM facebook page https://www.facebook.com/RPPFM/ to watch!

This live coverage would not be possible without the continued support of local businesses.

OTHER RESULTS AROUND LOCAL FOOTY 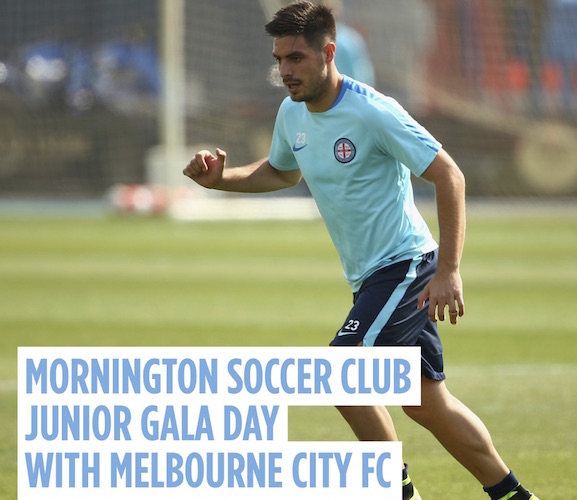 An exciting day for local Soccer fans, young and old! Sunday, 14 August 2016 at 9am Have your chance to meet and watch the squad train at Mornington Soccer Club - Dallas Brooks Park Register for the junior tournament (under 7's and under 12's) and you'll have access to meet the Melbourne City players and receive a full 2016/17 junior membership. There will be loads of fun for the whole […]