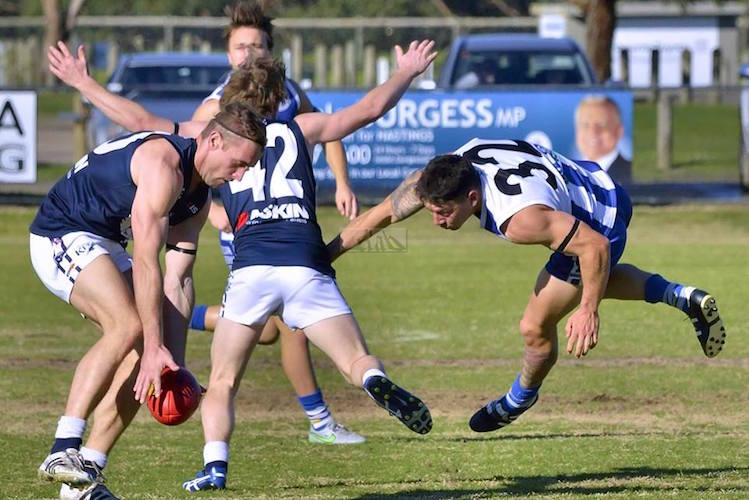 Round 13 by Brendan Rhodes

AN eight-goal masterclass from Mick Meehan locked up Edithvale-Aspendale’s spot in the Peninsula League finals and kept alive its top three hopes with a dominant 52-point victory over Langwarrin in the Telstra Stores Mornington and Rosebud RPP FM Match of the Day at Lloyd Park on Saturday. 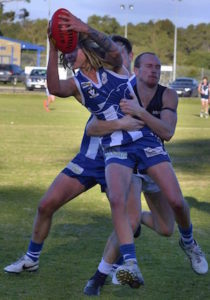 But more about that later, because the real story was in the Nepean League at Glover Reserve, where Devon Meadows recorded one of the most emotional and famous victories seen in country footy for many years when it overran Rye by 17 points.

The Panthers had every right to be shattered, and there is no doubt they were after the sad passing of vice-captain Beau Miller to cancer on Thursday, and there would have been nobody willing to criticise them if they had been unable to even take the field against the Demons.

But not only did Devon Meadows run out, it did so with 23 men as

Miller was there in spirit to lift his teammates to a victory that nobody could possibly begrudge them achieving.

Rye controlled the first half and looked well placed to potentially move into the top three entered the last month of the season when it built a 25-point advantage at half-time on the back of another dominant display from league medal favourite Ryan Mullett, Leigh Morse and Jimmy Jennings, as well as three goals from Dean Millhouse.

But the Panthers came out of the sheds for the third quarter like a team possessed, and they did it for Beau, piling on 6.1 to 0.1 to turn for home with an 11-point advantage.

With Jesse Dehey, Kyle Beveridge and Chris Doria leading from the front and Ashley Adams booting three goals, Devon Meadows cleared out to a 29-point advantage late in the game, with two late goals to Rye only serving to delay the outpouring of emotion that came at the final siren in what was the perfect tribute to a much-loved mate. 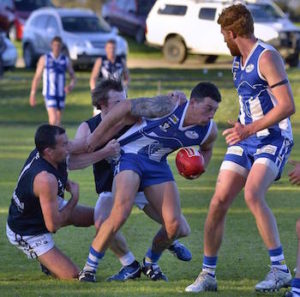 At Lloyd Park, Edithvale-Aspendale wasted no time showing the class gap between the top five and the ninth-placed Kangaroos, moving the ball forward quickly, where goalsneaks William Flavelle (three goals) and Darcy Warke (one) looked dangerous whenever it went near them.

Todd Woodbridge dominated on the wing for the Eagles, Craig Wray continued his fine season in defence, Brendan Neville and Tim Mannix were outstanding in the middle and Jack Doman showed plenty of promise.

Despite their control, however, the Eagles were unable to shake Langwarrin on the Rye Hotel Scoreboard, with their 29-point half-time lead having been helped by a lack of system from the home team.

The Kangaroos were hamstrung by the lack of a big target up forward, and often were caught out going side to side instead of direct, giving Edithvale-Aspendale plenty of time to get back and help the defence out.

Nick Tuddenham and Shane Paterson led the way for Langwarrin, while Matthew Naughton worked tirelessly in the ruck and Mitchell Cuthbert never gave up down back, but it only appeared a matter of time.

That time came in the third quarter, and it was sparked by Mornington Peninsula Brewery Player of the Day Meehan, who had earlier kicked his 50th goal of the season with his first of the day.

Meehan turned on a show to kick four consecutive goals midway through the term, and with Flavelle putting his hand up for goal of the year with a spectacular running, bouncing, solo effort, the Eagles suddenly led by 62 points and looked on their way to a percentage-boosting triple-figure triumph.

The only downside was a potentially serious ankle injury to Tom Turner, while Dan McCarthy and Joel O’Sullivan finished on the bench with leg problems. 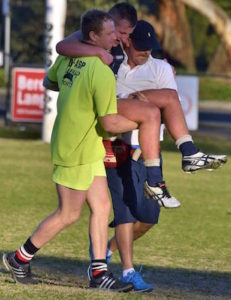 To Langwarrin’s credit, the Roos picked up their workrate and kicked the next three goals either side of three quarter-time, with the best story they could take out of the game being the performance of debutants Kyle Busuttil-Inglis and Cody Howard.

Busuttil-Inglis in particular showed he wasn’t out of place at senior level with an assured display which was rewarded by two goals – he should certainly hold his spot in the team for the rest of the season for valuable experience.

The Pythons led by just seven points at half-time, but found another gear that the Sharks just didn’t have, kicking 11.5 to 0.6 for the second half as Adam Maling and Chris Guganovic also dominated.

Mt Eliza snuffed out the finals chances of a gallant Karingal with a 23-point win at Ballam Park.

The Bulls led by eight points at three quarter-time to raise hopes of an upset, but the Redlegs lifted when required, kicking five unanswered goals in the last quarter to double their score and hold onto second spot on the ladder.

Frankston YCW took three quarters to shake off the challenge of a gutsy Chelsea at Chelsea, finally kicking the last four goals to win by 44 points after holding just a 21-point advantage at the final change, while Jackson Calder was the third forward to have a day out, piling on nine goals as Mornington finally produced its best form to destroy Seaford by 74 points at Alexandra Park.

Back in the Nepean League, and Sorrento edged clear of Dromana in the final quarter at David McFarlane Reserve to end the Tigers’ season with an 11-point victory.

The Tigers were charging into finals contention, but their inconsistent form meant they simply had to keep winning – and it was a task they looked up to when they led at every change in a bid to beat the Sharks for the second time this season.

Beau Cosson’s four goals and the form of Christian Ongarello and Billy Quigley had Dromana in the box seat when it led by four goals midway through the third term.

But Sorrento’s own season was on the line, and Nick Corp (five goals) responded along with Luke Tapscott, Nick Marston and Jack Gipp to get back within seven at the last change before kicking four goals to one in the last term.

The Jekyll and Hyde nature of the Nepean competition was never more evident than at Olympic Oval, where Rosebud hammered Hastings by 46 points to take the Blues’ spot in the top three.

Back in Round 2, three months ago to the day, Hastings had embarrassed Rosebud by 103 points at Thomas Barclay Oval, but it was a totally different Buds line-up that turned the tables, with captain Greg Bentley driving the revenge.

Bentley kicked four goals in a best-on-ground display as the Buds dominated from start to finish with Nick Boswell and Daniel Wilson continuing their fine seasons to outclass a Hastings team that had little support for Mark Devereaux and Paul Rogasch.

Somerville moved back into the top five, seeing off a third quarter challenge from Pearcedale to win by 43 points at Pearcedale.

The Eagles led by 50 points early in the third term before the Panthers rallied either side of three quarter-time to get back within 20 points during the final term, only for the six-goal performance from the in-form Ben Crowe to eventually overwhelm them a second time.

Red Hill moved into second spot on the ladder with a 66-point win over Crib Point that should have been much bigger – the Hillmen wasted a percentage-building opportunity by kicking 14.24.

James Degenhardt (six goals), Zac Longham (five) and Michael Maiorino (four) had a field day as the Yabbies failed to even score until midway through the final quarter before Danny Pullen’s late major got them to 1.3 and helped them save some face.

ARCH-RIVALS AND NEIGHBOURS RYE AND ROSEBUD PLAYED A DRAW WHEN THEY MET IN THE SEASON OPENER BACK ON GOOD FRIDAY. NOW THEY ARE LOCKED IN A CONGESTED BATTLE FOR FINALS SPOTS, WITH THE BUDS LOOKING TO CONSOLIDATE A TOP THREE SPOT, AND THE DEMONS HOPING TO BOUNCE BACK AFTER DROPPING TO SEVENTH LAST WEEK. JOIN BRENDAN RHODES AND MICHAEL VOSS FROM 1.45PM SATURDAY AT RJ ROWLEY RESERVE ON 97.3FM, THE RPPFM APP OR www.rppfm.com.au FOR ALL THE ACTION.

Thank you to our photographer, Rab Siddhi for his well-expressed action shots every week for the Telstra RPP FM Match of the Day.

To see more of his work go to the RPP FM facebook page https://www.facebook.com/RPPFM/

OTHER RESULTS AROUND LOCAL FOOTBALL