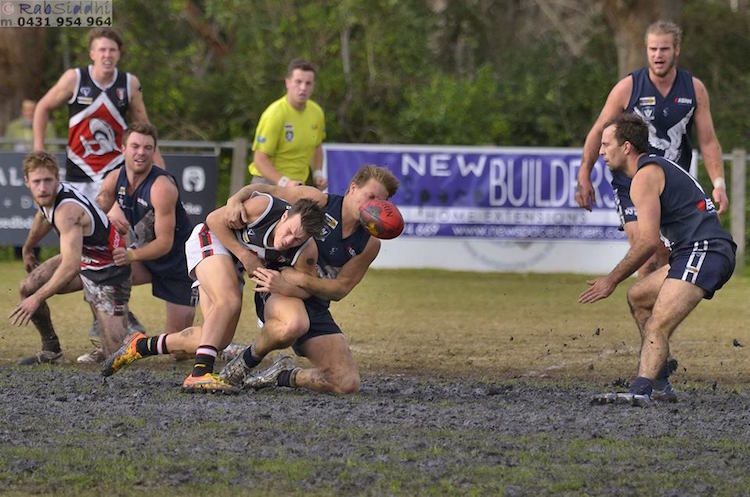 BONBEACH’s former AFL big man Chris Bryan went from villain to hero in the space of a minute to lift the Sharks to an impressive 24-point victory over Edithvale-Aspendale in the Telstra RPP FM Peninsula League Match of the Day at Regent’s Park on the Queen’s Birthday Weekend. 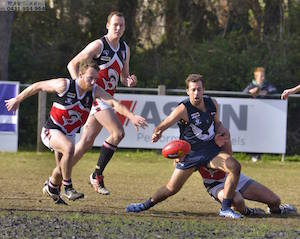 Ex-Collingwood and Carlton player Bryan had been quiet for most of a seesawing clash before moving into the ruck in the final quarter.

With the Sharks leading by just five points on the Rye Hotel Scoreboard at the 10-minute mark, they awarded a free kick at the top of the goalsquare that would have set them on the path to victory when a scuffle broke out. 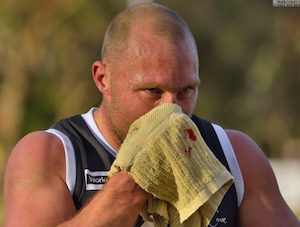 Bryan ran in to remonstrate and was penalised for making high contact to Sean Fisher, an indiscretion that could have turned the match on its head.

But, obviously chastened by his error, Bryan then took a big pack mark on Bonbeach’s next forward entry before calmly bombing the goal from outside 50 to wrest back control once and for all.

He repeated the dose from even further out shortly afterwards either side of two goals from Shane McDonald as the Sharks banged on five unanswered goals to run away with a convincing victory in what had otherwise been a tight, evenly-matched local derby.

Earlier, it was the Eagles who got off to a strong start, taking advantage of wasteful disposal going forward from Bonbeach to get their running game going and hurt the Sharks on the rebound.

It is a style that works well because it suits their star full forward Mick Meehan.

Meehan was unstoppable early, kicking the first three goals of the game and four for the term as Edithvale-Aspendale led by 12 points at quarter-time – a lead that would have been bigger if not for Luke Damon, who kicked two of his three first-half goals.

But while Meehan’s five goals took him to a league-leading 36 for the season, he has no support up forward, with the seven goals kicked by Nathan Carlon being the second best at the club.

Bonbeach switched Matt Douglas onto Meehan after quarter-time, started using the ball better and gradually wrested control of the game, despite losing ruckman Nick Alexandrou to a horror elbow injury at the opening bounce of the second quarter.

Four goals to one in the second term gave the Sharks a six-point lead at half-time before the game tightened up in the third quarter – Meehan kicked his fifth and the Eagles added two to one to lead by three points turning for home, setting up what looked to be a grandstand finish.

But Bonbeach had other ideas, led by stars Bryan and McDonald finding another gear to drive their team into the top five.

The Sharks had good players all over the ground, with Mark Tyrell providing drive through the middle to be named the Mornington Peninsula Brewery Player of the Day, while Jack Williams, Gary Carpenter and Jackson Casey starring in the midfield, Beau Bailey showing composure beyond his years, and Daniel Smith, Jacob Flannery and James Murnane had their moments.

Edithvale-Aspendale was led by multiple best and fairest winner Tim Mannix and his brother Steven, while Liam Harris was outstanding off half back, Fisher and Craig Wray were excellent in defence and Jeremy Heys and Brendan Neville were good in the middle.

One of the highlights, however, was the ruck contest, with Eagle Chris Wylie and Shark Dylan Jones both well up in the best for their respective teams.

RYE continued its mid-season resurrection, claiming its second top of the ladder scalp in consecutive weeks with a gutsy 10-point defeat of Sorrento at David Macfarlane Reserve.

In what was a dour struggle in a match brought forward from Round 15, the Demons overturned a 58-point loss to Sorrento suffered as recently as May 14.

And it was the premiership quarter where Rye got it done.

Trailing by 14 points at the main change having only kicked two goals in the first half, the Demons turned it on with five unanswered goals to get out by as much as 20 points late in the quarter.

They were led by classy Rye junior Luke Davies-Uniacke, who was released to play by the Dandenong Stingrays and turned in a matchwinning three-goal debut, and second-gamer Nick Baron, while Nathan Henley, Jimmy Jennings and Ryan Mullett continued their fine seasons to keep their team within four points of the top five.

James Brigden and Ryan Potter performed well for Sorrento, while Tyrren Head was another to shine, but the Sharks missing key forward Scott Lockwood and midfielder Leigh Treeby.

Red Hill came from four goals down at quarter-time to win a thriller over Dromana by five points at Red Hill yesterday.

The Tigers flew out of the blocks with six goals to two in the first quarter as they desperately tried to keep their season alive, with Billy Quigley and Christian Ongarello in dominant form.

But the Hillmen quickly turned things around and went one better, with six goals to one to lead by a goal at half-time as Jake Mitchell bounced back to form and Sean Marchetti provided strong support.

The second half went goal for goal throughout, and it was Red Hill which found itself in front at the right time in a match where little separated the teams throughout.

IT’S ANOTHER PENINSULA LEAGUE LOCAL DERBY THIS WEEK FOR THE RPPFM 98.7 TELSTRA STORES MORNINGTON AND ROSEBUD MATCH OF THE DAY AS THE TEAM VENTURES TO CHELSEA RESERVE FOR A LAST ROLL OF THE DICE SHOWDOWN BETWEEN CHELSEA AND SEAFORD. CAN THE SEAGULLS SORT OUT THEIR WAYWARD KICKING FOR GOAL, OR WILL THE TIGERS CONTINUE THEIR COMPETITIVE SEASON. JOIN MICHAEL VOSS AND BRENDAN RHODES FROM 1.45PM SATURDAY ON 97.3FM, THE RPPFM APP OR www.rppfm.com.au FOR ALL THE ACTION.

Details will be updated as they come to hand.

MORE RESULTS AROUND THE PENINSULA