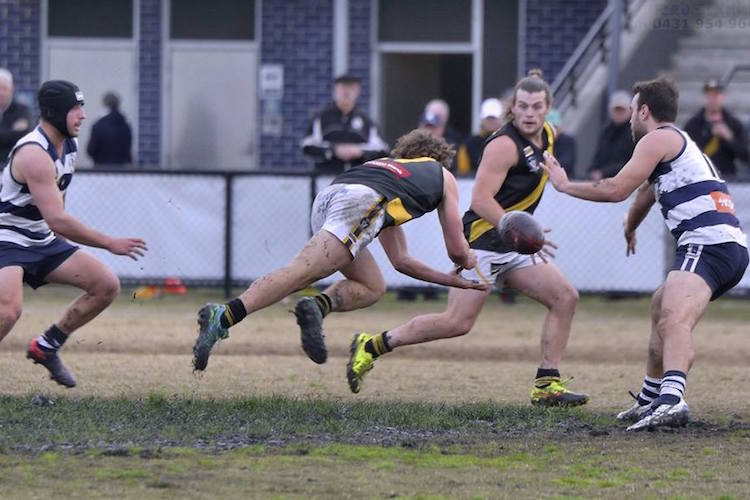 SEAFORD took full advantage of an injury-crippled Chelsea to end the Seagulls’ season and stay within touching distance of the top five with a 91-point belting at Chelsea Reserve yesterday. 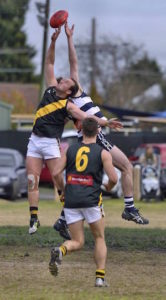 Chelsea had the better of the first half of the Telstra RPP FM Match of the Day, but once again failed to put the score on the Rye Hotel Scoreboard as it led by a point at the main break, despite the best efforts of debutant big man Jackson Roder, Daniel Aarsman and James Brain.

But the wheels were already off the wagon by that stage, with Matt Gardiner (ankle) and Josh Tripcony (ribs) out of action early, to be joined before half-time by Grant Trew (achilles) and Brain (knee), leaving the Seagulls to play the entire second half with no interchange.

And Tigers cashed in, piling on 9.5 to 0.1 in third term and 7.4 to 2.0 in the last as Mornington Peninsula Brewery Player of the Day, Matt Herbert, Aaron Walton and Jonothan Haidon had a field day.

In other games, Bonbeach moved into fourth spot with a hard-fought eight-point win over Karingal, Pines escaped by five points against a gallant but wayward Langwarrin, Justin van Unen booted seven goals as Mt Eliza disposed of Edithvale-Aspendale by 51 points and Frankston YCW repeated its triple-figure Grand Final obliteration of Mornington to win by 112 points.

Earlier, it was a scrappy opening to a clash in which both teams desperately needed to win to stay in touch with the top five.

Turnovers were the order of the day, and at one stage six consecutive kicks down the grandstand wing were marked and returned by the opposition.

Chelsea did have the better of these early exchanges, getting out by as many as 14 points early in the second term at 3.4 (22) to.2 (8), but the Seagulls were extremely wasteful, and some of the set-shot goalkicking –action and results – could only be described as embarrassing. 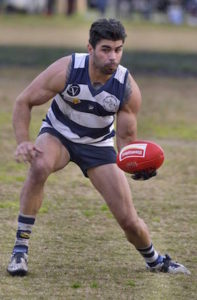 Although they had all the play and the scoreboard advantage, the injuries were starting to take their toll, and by the time experienced star David Willett burst from a pack and kicked a classic long goal from 50 midway through the final quarter, Chelsea had conceded 14 majors in a row.

And it got no better as Seaford continued its percentage-building rampage, with Herbert sneaking forward from full back to finish with three goals, 200-gamer Joe Hallal and fellow small forward Kyle Matthews having a field day with four majors each, Walton kicking three and Haidon snagging a couple.

The only Tigers’ forward not to cash in was Jackson Mockett, who did everything right as a lead-up marking target except finish off, ending with.5 for the day.

The Seagulls finished with 17 men on the ground as Jake Greeley joined the casualty ward with a suspected broken arm late in the match.

Bonbeach moved into fourth spot with a hard-fought eight-point win over Karingal at Ballam Park.

The Sharks failed to kick a goal in the opening quarter and trailed by 17 points as Leigh Poholke dominated up forward with five goals for the Bulls and Duncan Proud turned back just about every forward thrust from the visitors, while Aaron Paxton and Aaron Lees were winning plenty of the ball.

But Bonbeach worked its way back into the game with four goals to one in the second term to take the lead, with Luke Damon (three goals) making his presence felt and Jackson Bennett, Jacob Flannery and Shane McDonald took over in the midfield.

The second half turned into a battle of wills, with the Sharks wasting several chances to put the Bulls away, but doing enough to find their noses in front at the right time.

Pines escaped by five points against a gallant but wayward Langwarrin at Eric Bell Reserve.

The bottom-placed Kangaroos took it up to their more fancied opponents all day and finished with 18 scoring shots to 13, but good teams do what they have to do and the second-ranked Pythons looked like they were getting on top with a 15-point lead at the final change with Aaron Edwards having booted three goals and Adam Marriner and Shane Waterstone in control.

Langwarrin came again, holding Pines to just two behinds in the final term, but could only find two of the three goals it needed, despite the desperate efforts of Blake Peach and debutant under-19 star Zach Andrewartha.

Mick Meehan kicked three for the Eagles, but they were never in the game after the Redlegs kicked away with five goals to one in the opening term.

The Stonecats led by just 10 points at quarter-time, but seven goals to one in the second term blew the match open and nine to one in the last finished it off as four players booted four goals each in another scary display of the champion’s potency.

THE unpredictable Nepean League again lived up to its billing with two – and almost three – more big upsets.
Dromana stunned Somerville by 37 points at Somerville for its best win of the year and Devon Meadows overturned Sorrento by two points, while Crib Point fell just two points short of halting a wasteful Rye’s momentum at RJ Rowley Reserve.

At Somerville, the Tigers took control in the first quarter and led all day to dismantle one of the premiership favourites, after having done the same thing to Sorrento early in the season.

Billy Rolfe booted three goals and Rohan Hogenbirk were in fine touch for the Eagles, but it will go down as a day to forget for last year’s Grand Finalists.

At David McFarlane Reserve, Devon Meadows withstood a last quarter blitz from Sorrento for a win that kept its season alive for another week.

The Panthers controlled the game for three quarters on the back of starring roles from Jayden Sullivan and Jesse Dehey and three goals each to Jack Hazendonk, Glenn Michie and Kyle Salerno, leading by 24 points with one term to play.

But the Sharks awoke in the final quarter on the back of Nick Corp’s six goals and the run of James Brigden, Luke Tapscott and Tyrren Head, charging home with four goals to one.

It took some desperate defence from the visitors and some wonky kicking from the home team – 4.7 to.3 for the term – to deny Sorrento at the death.
While the Panthers celebrated being on the right side of the ledger, there was no such luck for Crib Point, as the Magpies just failed to hold out Rye.

The Magpies were in the spotlight during the week for their underwhelming start to the season, and James, David and Tim Cook responded in fine fashion to lead a thrilling contest at every change.

But despite kicking 2.9 in the last term, the Demons did what Sorrento couldn’t do, and got themselves in front at the siren, and they had Matt Greig (four goals), Ryan Mullett and Kris Bardon to thank.

Frankston consolidated top spot when it brushed aside reigning premier Rosebud by 33 points at Greg Beck Oval, with Ryan Marks-Logan the star in a match where no player from either team was able to kick multiple goals.

Harry Larwill had a day out with seven goals as Red Hill easily beat Pearcedale by 69 points at Red Hill to move back into the top five and Hastings trio Colin McVeigh (seven goals), Dale Alanis and Luke Hewitt (six each) ensured the Blues bounced back from a disappointing loss last week to smash neighbours Tyabb by 139 points at Thomas Barclay Oval.

IT’S THE REIGNING PREMIER AND ONE OF THE HEIR APPARENTS WHEN ROSEBUD TAKES ON SOMERVILLE IN THE RPP FM TELSTRA STORES MORNINGTON AND ROSEBUD MATCH OF THE DAY AT OLYMPIC OVAL ON SATURDAY. CAN THE BUDS PUSH BACK INTO THE TOP FIVE OR WILL THE EAGLES STRENGTHEN THEIR PUSH FOR A DOUBLE CHANCE. JOIN MICHAEL VOSS AND BRENDAN RHODES FROM.45PM SATURDAY ON 97.3FM, THE RPPFM APP OR www.rppfm.com.au FOR ALL THE ACTION.

Details will be updated as they come to hand.

OTHER RESULTS IN LOCAL LEAGUES